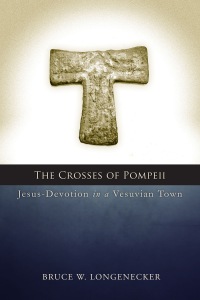 For all of those who are interested in early Christianity, and especially those who have walked in the streets of Pompeii, this book should be interesting reading:

Bruce Longenecker,
The Crosses of Pompeii: Jesus-Devotion in a Vesuvian Town.
Fortress Press, 2016 (Release date: May 1, 2016)

“Archaeologists have disputed the scarce evidence claimed for the presence of Christians in Pompeii before the catastrophic eruption of Mount Vesuvius in 79 CE. Now, Bruce W. Longenecker reviews that evidence in comparison with other possible data of first-century Christian presence elsewhere in the Mediterranean and reaches the conclusion that there were indeed Christians living in the doomed city. The Crosses of Pompeii presents an elegant case for their presence, with photographic illustration of the available archaeological evidence.” (Publishers text).