Last Monday, April 13th, several members of a Norwegian society (Norsk Nytestamentlig Forskerforum), were gathered for their Spring meeting at the University of Nordland, Bodø. Usually their metings are held in Oslo, but this time  we were also participating in a special event: The thological library of Prof. em. Peder Borgen, were handed over to the library at the University. Hence the session before lunch were dedicated to the studies of Philo of Alexandria.

At left here, you see Prof. dr. Per Jarle Bekken giving a presentation of the various works of prof. Borgen. Prof. Bekken, now a professor at the University of Nordland, is one of the former doctoral students of prof. Borgen, and very happy for having the local university library getting updated and expanded with relevant literature on the Bible, ancient Judaism, and even some volumes on Norwegian church history. On Bekken, see here and here. 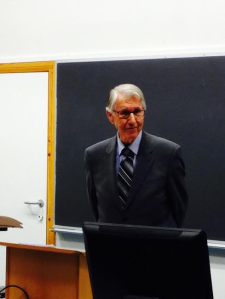 Prof. Peder Borgen (87 last January!), then held the main lecture this morning on Encyclical education and Religion. It was an impressive presentation by one who have made the study of Philo a main focus in his scholarly works for the last five to six decades. We also got a broader understanding of how much his celebrated dissertation (published by Brill in 1964,republished in 1981; now out of stock, but a paperback version is said to be published soon) represents for his own studies and for a better understanding of Philo, and how relevant ideas in this volume as well as in later Philo studies by Borgen still are today for understanding the – in many ways enigmatic – figure of Philo of Alexandria. For myself it was another reminder of much the synagogue and the Jewish milieus of Alexandria meant for Philo and his works.

After lunch there were yet two other sessions: in the first prof. Bekken presented some issues from his most recent book (The Lawsuit Motif in John’s Gospel from New Perspectives. Jesus Christ, Crucified Criminal and Emperor of the World (Novum Testamentum, Supplements 158; Leiden, Brill, 2014).).

In the other, Prof Karl Olav Sandnes, Norwegian School of Theology (MF), gave an introductory presentation of his present research project, focusing on The Prayer of Jesus in Getsemane.