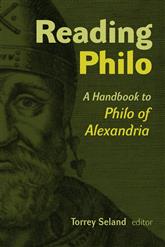 The book, edited by me, to be published later this fall; Reading Philo: A Handbook to Philo of Alexandria (Eerdmans), is designed to function as an introductory handbook for advanced MA students and PhD students who want some relevant information about Philo, and/or who are just in the initial process of studying him.

But I will not be surprised, however, if some more seasoned scholars will also find several of its articles both informative, relevant and interesting for their own work!

The book is divided into three parts; Introduction and Motivation (pp. 3-16); Philo of Alexandria in Context (pp. 19-ca 155); and Why and How Study Philo (pp. 157-ca 286), followed by a Bibliography and Indexes. Both of the two main sections contain 5 chapters, written by a total of 9 well known Philo scholars.

Philo of Alexandria in Context
The section dealing with Philo of Alexandria in Context consists of  five presentations, and I give here some brief presentations of their work. Note however, that the contributions concerned are much more richer on descriptions and suggestions that it is even possible to mention in this overview: First, the Finnish scholar Karl-Gustav Sandelin focuses on “Philo as a Jew”. However one might describe Philo, there is no doubt that he was a Jew, both by ethnicity and by conviction. Sandelin addresses some of the standard views of Philo’s Jewishness, but he himself favors Philo as a representative of the Jewish wisdom tradition. Here he attempts to illuminate Philo as a Jew from three perspectives: (1) What should be said in general terms of Philo as a Jew, i.e., how is Philo a Jew like any other Jews of his time? (2) What is it in Philo’s Judaism that makes it distinctive? (3) Judaism in Philo’s time was not a monolithic phenomenon, and several Jewish groups existed. Does Philo adhere to the views and practices of any of these?

The next chapter, written by the editor of the volume, Torrey Seland, represents an investigation of the political aspects of Philo’s public life, that is, an attempt at describing “Philo as a Citizen,” as a Homo politicus. The main part of the essay is devoted to Philo’s descriptions of Roman rule and his own activities as a politically active citizen. After some introductory comments on Philo’s social location and his background as coming from a family of politicians, the chapter is divided into three main sections: recent studies on Philo and his politics; issues of political theory in Philo; and Philo as a practical politician.

Philo was an interpreter of the Jewish Scriptures. The Norwegian doyen of Philo studies, Peder Borgen, addresses this topic in his chapter on “Philo — An Interpreter of the Laws of Moses”. Borgen first discusses Philo’s expository treatises, which fall into two main categories: those rewriting the Pentateuch and his exegetical commentaries, comprising the Allegorical Commentary on Genesis and the Questions and Answers on Genesis and Exodus. He briefly presents the most important of Philo’s hermeneutical presuppositions. Finally, Borgen discusses the historical writings Against Flaccus and On the Embassy to Gaius as a report on a struggle for the interpretation and application of the laws of Moses.

The matter of Philo’s education has been much discussed, with views ranging from Philo as a most conservative Jew to a Jew very much acculturated to Greco-Roman society and its educational ideals. The Finnish scholar Erkki Koskenniemi concentrates on these issues in his chapter on “Philo and Classical Education”. His study presents what we generally
know of Greek education and explores the options Jews had — and were willing to employ in Greek Alexandria. Koskenniemi investigates then what Philo himself says on the topic, details how Philo uses or mentions Greek philosophers and poets, and estimates how well he was versed in secular literature.

Gregory E. Sterling, in his chapter on “ ‘The Jewish Philosophy’: Reading Moses via Hellenistic Philosophy according to Philo”, deals explicitly with the question of Philo’s relations to philosophy. After reflecting on how other authors regard Philo as a philosopher, Sterling addresses the issue of philosophy in the works of Philo. He argues that it is impossible to read Philo without some understanding of his relationship to Hellenistic philosophical traditions. Acknowledging the insights of Philo’s Alexandrian predecessors (Aristobolus, Pseudo-Aristeas, the Allegorists), Sterling demonstrates
that Philo stood within a line of philosophically-oriented interpreters, thus working within a tradition; he had both predecessors and contemporary figures who were deeply indepted to philosophy. Philo himself, however, should be considered as an eclectic thinker; he drew upon what he considered to be the best from several traditions and incorporated that into
his thought.

I hope this brief comments have wetted your interest in this volume; in a later posting, I will briefly present how we in the book deal with the issues Why and How Study Philo.